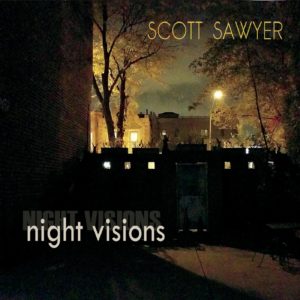 “It’s perfectly understandable why connoisseurs of fine music often refer to Scott Sawyer as a jazz guitarist. It’s because he does the jazz thing so well. He’s an expert at breathing new life into that old graveyard of American Popular Song. By artfully re-investigating this body of familiar melodies and picking through the harmonic bones, Dr. Scott has resuscitated many a standard.

Jazz, however, is merely one of the many tools within his gig bag. He fingers the blues electric with the authenticity of someone who has lived them. That’s not all. With country-boy affability, he strums and twangs. Chicken-picks. Shucks. Jives. Funks it up. And then breaks your heart with that one poignant love note that’s soft as an angel’s wing.

Like his better-known contemporaries John Scofield & Bill Frisell, Sawyer was weaned on the Beatles, the blues & ‘Bird’. You can hear it in everything he plays, a new kind of guitarspeak comprised of pop, improv and sounds never before heard. It is a language Sawyer uses with authority.” – Joe Vanderford