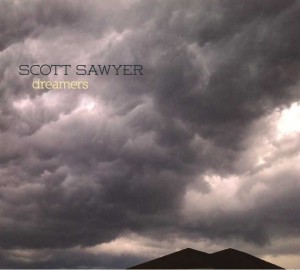 Life’s not always fair, is it? If it were, North Carolina-based improviser Scott Sawyer would be hyped like his better-known contemporaries, guitar heroes Bill Frisell, John Scofield and Pat Metheny. But those of us who have long celebrated his blues-inspired, often understated approach to the 6-string knew that his day would come. And that day, my friends, is today.

With the release of Dreamers, Sawyer announces to the rest of the world that there’s a new name, one that belongs in the pantheon of great American guitar-slingers. Welcome to the club, my man, because this record is the one you always wanted to make.

To paraphrase Joni Mitchell, Dreamers deserves all the hyphens, from jazz-to-blues-to-rock. The album’s flexible rhythm section, bassist Ron Brendle and drummer Brian Sullivan, is straight out of jazz: elastic, ever-changing, strumming and stroking in support of Sawyer’s every whim. But labeling Dreamers as just jazz is like appreciating only one color from the palette of a master painter. The deep blues shade every note Sawyer plays. He bends the strings, hesitates, surges and slurs, dipping the music into the dirty water of some mythical Delta. Beyond the record’s obvious blues and jazz lurks the accessible aesthetic of pop and rock as well. Note the presence of timeless tunes by Nick Drake and Bob Dylan, bittersweet vocals by multi-talented Kate McGarry and even a poetry recitation by Bruce Piephoff.

Out of Dreamer’s 11 tunes, 7 are Sawyer originals, including memorable melodies like “Booshki,” named for sawyer’s dog, “Copperhead Stew,” perilously tart to the taste, and the ethereal “Dreamer,” an unadulterated jazz ballad, all of which co-stars saxophonist Dave Finucane. A resident of Durham, Finucane is a major player who combines fluttering, Joe Henderson-like tone with the abstract ideas of Wayne Shorter. On this date, he plays Robin to Sawyer’s Batman, whether doubling the guitarist’s billowing lines with breaths of fresh air or whispering wry commentary from the music’s shadows. Like Sawyer, Finucane, who cut his teeth on the Boston jazz scene, is a cat worthy of attention far beyond regional borderlines.

McGarry is the session’s wild card, guesting on 3 cuts. On “Dreamer,” her buoyant, wordless vocal becomes like a second saxophone dancing with Finucane’s tenor. Moments later, McGarry reprises Nick Drake’s melancholy masterpiece, “River Man,” with a wispy, vibrato-less reading that starts slowly, but culminates in an emotionally charged conversation with Sawyer as the sounds of two savvy improvisers embrace and intertwine. Drake’s dirge gives way to bawdy Bob Dylan on “Not Dark Yet,” which McGarry blasts like Bonnie Raitt in full honky-tonk-angel mode. McGarry, donning many hats, wears them all with style.

The high-water mark is a 2-song “suite” dedicated to Sawyer’s friend from his days as a fledgling guitarist based in Greensboro. “Dakota” & “Joe Dunn” are heartfelt nods to the late legendary Guilford county musician-visionary from the ‘70s. Bruce Piephoff, who, like Sawyer, knew Dunn intimately, toasts Dakota’s eclectic nature with a poem rife with imagery of dark midnights and lonely train whistles. The words become a toast to “the music that burned inside you and me.” While Piephoff recites, Sawyer picks circles of soft, spiraling notes in the background in a simple but majestic ode to their departed pal. When the poem ends, Brendle and Sullivan re-appear out of the ether with long bass notes and brushes for “Joe Dunn,” a fitting requiem. Those who indulge in the sonic landscape of 21st century Americana, Bill Frisell-style, will recognize this territory, a place where folk-infused reminders of Woody Guthrie sound comfortable beside sophisticated jazz harmony and – maybe, just maybe – the dark, aromatic soil of the blues. Without sounding a bit contrived, the Dakota suite touches all those bases.

Leave it to Scott Sawyer, a rare modest man in these watch-me-now times, to spend an entire record reminding his listeners about other folks, be they departed heroes or merely the other musicians in his band. He has spent much of his career deflecting the spotlight and shining it upon others. Now it’s his time to burn brightly – and live the dream.

That’s what Dreamers is all about. – Joe Vanderford