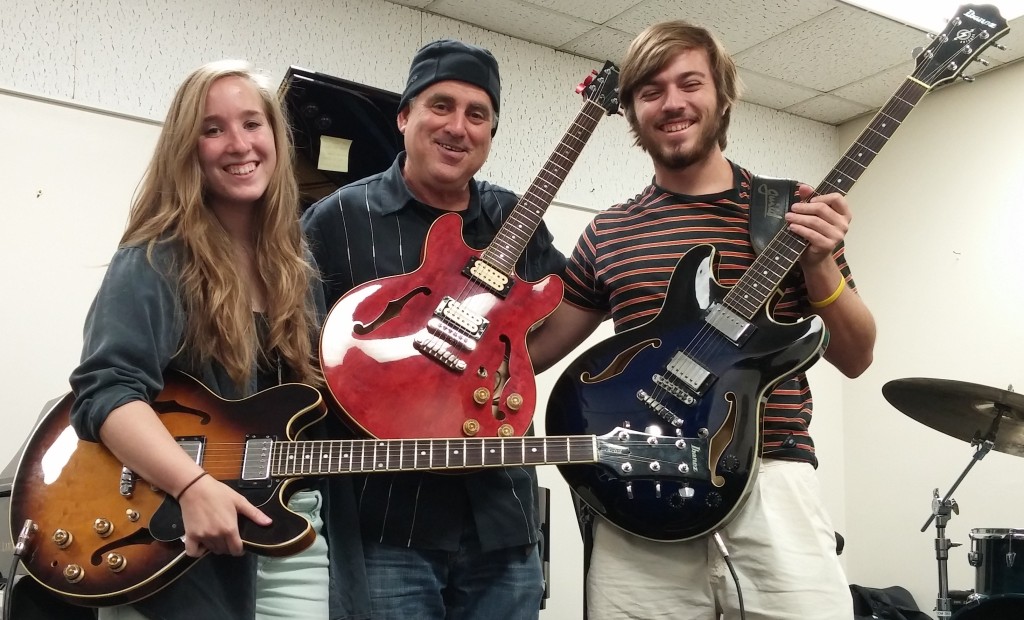 Friday, October 23 – The Scott Sawyer Trio (Jason Foureman on bass, Dan Davis on drums) and a few of Scott’s students will get together for a night of “Guitarspeak” at the Sharp Nine Gallery. Advance tickets are highly recommended; seating is limited and shows sell out in advance.

The Sharp Nine is an intimate listening room with great sight-lines. BYOB.

Scott Sawyer displays his musical diversity like a badge of honor, while continuing to explore the jazz tradition & beyond.

He’s maintained a private teaching practice since 1983, is an Adjunct Teaching Instructor at East Carolina University (applied jazz guitar lessons and Jazz Chamber since 2010), and Adjunct Lecturer of Jazz Guitar at the University of North Carolina-Chapel Hill (private lessons since 2013).

Scott has performed or recorded with many notable and iconic artists, and appears on 35+ albums. His latest album “Dreamers” was released in November 2013 and garnered some attention in 2014 via three Grammy Ballot nominations. His previous album “Go There” (2007) featured bassist Oteil Burbridge and charted on XM Radio. Numerous recording credits include Stephen Anderson – 360° Jazz Initiative “Distracted Society” (2015); Keith Water’s “Carolina Tracks” (2012; guitar and Associate Producer); Bruce Piephoff’s “Soft Soap Purrings” (2014; Producer, electric/acoustic gtr); “Still Looking Up at the Stars” (2012, Producer, electric/acoustic gtr); Dave Fox’s “The Meldavians-Farewell to Arigemon” (2012); Nnenna Freelon’s “Homefree” (2010) plus her 1997 Grammy-Nominated “Shaking Free”, “Live” (at the Kennedy Center; 2003) and “Listen” (1993); Lois Deloatch’s “Roots: Jazz, Blues Spirituals” (2010; guitar and Co-Producer); and Bill Anschell’s “a different note all together” (1998). He arranged & recorded “The Glory Of Love” w/ actor Danny Aiello; as featured in the Cinecom film “Once Around”. Complete Bio is here: scottsawyer.net/bio/

Creative musicians, in essence, work the seam between anything-is-possible openness and structural specificity, marrying these strange bedfellows time and again. …Guitarist Scott Sawyer’s Dreamers is a sonic manifestation of the aforementioned line of thinking. Sawyer balances head and heart, displaying a deep, in-the-moment emotional connection to his work while remaining ever-watchful of the big picture. – Dan Bilawsky (All About Jazz; Feb 2014)

With a warm and inviting sound, guitarist Scott Sawyer offers an intriguing and engaging collection of songs in Dreamers…Sawyer’s style of playing is complex yet tastefully restrained and nuanced…By doing so, he allows the song itself to shine as an artistic work, rather than using the song merely as a vehicle to display his prowess on the guitar. – Jeffrey Uhrich (All About Jazz; Feb 2014)

At last … an album that captures the eclecticism of Triangle jazz guitarist Scott Sawyer. …Throughout this album, you’ll find that Sawyer is a superb self-editor and an inspiring leader. He knows what he wants to say ensemble-wise and solo-wise. There is no indecision, and the performances benefit immensely from his precision and concision. – Owen Cordle (N&O; Oct 2013)

But labeling “Dreamers” as just jazz is like appreciating only one color from the palette of a master painter. The deep blues shade every note Sawyer plays. He bends the strings, hesitates, surges and slurs, dipping the music into the dirty water of some mythical Delta.. ..(Kate) McGarry reprises Nick Drake’s melancholy masterpiece, “River Man,” with a wispy, vibrato-less reading that starts slowly, but culminates in an emotionally charged conversation with Sawyer as the sounds of two savvy improvisers embrace and intertwine. – Joe Vanderford (2013)